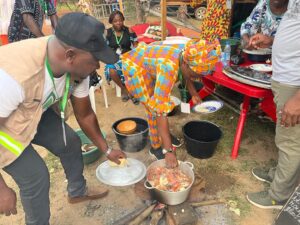 In African context, food plays a key role. Different communities relate to food differently, but the bottom line is that within the continent, food is a cultural expression. There is an onslaught of attacks on African food systems. This has taken various forms from training of African scientists on conventional food production, with emphasis of course on chemical intensified methods to increase food production at the expense of people’s health. Other predatory influence on African food has been through research which is geared towards endorsing industrial agriculture under the guise of tackling global food insecurity. From the colonial period, African food has been demeaned, with smallholder farmers forced into labour and plantations, to date the recolonisation of African food systems is by making Africa a source of raw materials for agricultural products. Take an example of Ghana, a main producer of cocoa, but where does the best chocolate come from? –Switzerland, how many coffee bushes are found in Switzerland? your guess is as good as mine.

Preparation of Mukimo from Kenya 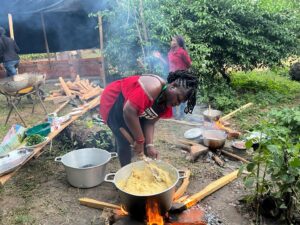 African indigenous seeds, passed on from generation to generation is demonised. Farmers are told that indigenous seeds and traditional farming methods are archaic and have no place in the modern world. Seeds that used to feed our forefathers and enabled them live healthy for years, is being treated as diseased. Farmers are often told to pump more fertilisers in their farms, in some cases countries have put in place subsidised programs where farmers are given seeds and chemicals, and this is happening in countries such as Malawi and Zambia through the Farmer Input Support Programme(FISP). In Zambia, FISP was first introduced as Fertiliser Input Support Programme, obviously with the major aim of increasing fertiliser use. The objectives of FISP are said to improve food security and income of smallholder farmers by facilitating their access to improved agricultural inputs. However, the realities are that farmers fin these programmes problematic[1] and not meeting their needs and this is also a way of promoting monoculture and input dependency. At the onset, fertilisers are often made to appear to be cheap while in reality when the farmer calculates the cost of production and the inputs, it tends to be expensive. 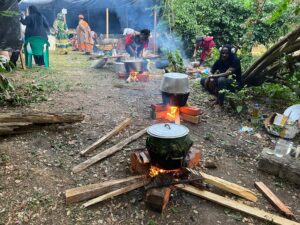 Through agro-dealer programmes, farmers are chained to agrovets for as long as they produce food. Taking advantage of the lack of non-functional agricultural extension service across Africa, agrovets become the go to place when farmers want information on production .Agrovets on the other hand are business enterprises , their goal is to make profits , whether the seeds and the chemicals they sell to farmers work or not .An agrovets sales person will never tell a farmer that the more chemicals you pump into your soil the more your soil becomes toxic , this is very deliberate because for agrovets it is profits before people.

African Seed and Biotechnology Programme is a continental programme for the development of the seed sector in Africa [2], this targets smallholder farmers. Many African countries have punitive clauses within their seeds and crops legislations and this is criminalising sharing of indigenous seeds[3] .These legislations have heavy fines which to many farmers who hardly own the land in the first place can hardly afford. These legislations in essence are structures put in place to create a conductive environment for Transnational Corporations dealing in seeds and agrochemicals to have a ready market backed by laws. When exchange and selling of indigenous seeds is criminalised, the remaining source of seeds, which is legitimised becomes agrovets and who owns the agrovets or in whose interests do the agrovets operate? It is often said that African seeds are not nutritious, how then did our forefathers live for so long if the African food was not healthy and nutritious. Veronica Kalondu a 90-year-old grandmother from Kaani in Machakos County-Kenya says during an interview, I owe my long life to the indigenous seeds that I grow and indigenous food that I eat. Kalondu says that when you eat indigenous food, the hunger pangs are kept at bay and it is possible to only have one meal because indigenous food have the requisite nutrients.

Preparation of Jollof rice -from Ghana 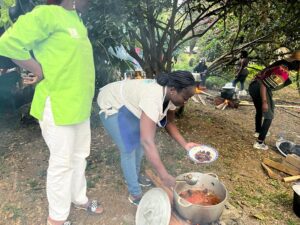 A  look at supermarkets shelves  today you find every meal has a label of bio fortified. Does it mean our food does not have the necessary minerals and other nutrients? And where have these minerals gone to?.Bio fortification goal is said to be reduction of mortality and morbidity rates related to micronutrient malnutrition and to increase food security, productivity, and the quality of life for poor populations in developing countries. The problem of food production in Africa is not because our soil becomes unhealthy every day because of overuse of fertilisers. Africa has the most arable land in the world and a conducive weather for food production, why then does Africa top the list of the most hungry and malnourished people in the world? This is because of systemic problems and the various inequalities that exist in the food production value chain. Africa is conditioned to be a primary producer continent, producing for markets abroad, it also has to do with policies that benefit corporations at the expense of food producers and a fragile food systems heavily dependent on imports. 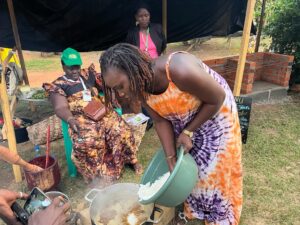 Prior to colonisation and the current re-colonisation, Africans had thriving food systems, indigenous varieties of seeds were well developed, they had names and were biodiverse. A maize cob had different colours, some purple, maroon, yellow, red all mixed as a tapestry of a beautiful rainbow. Today maize is either white or yellow. The multi- coloured varieties have disappeared. Today you will find just a few farmers with these indigenous varieties. This calls for reviving of our seed systems before it is too late to do so. Many seeds have become extinct, never to be seen again. In African culture, food is not just to fill the stomach, food preparation is an art. Families come together when food is being prepared. This is a platform for exchanging updates of what is happening in the village. The process of chasing chicken in the African compound for it to be slaughtered is therapeutic. In Africa chicken are not caged. As Dr. Melania Chiponda of African Women’s Development Communication Network (FEMNET) aptly put it, “our chicken are free rangers, they exercise, they run and are not overfed on chemicals then caged as is the case in Europe”. There is division of labour on who cooks which food. Men are responsible for slaughtering of livestock; women are responsible for keeping the fire going. 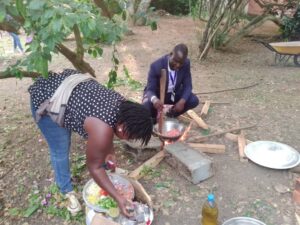 Philanthro-capitalism is taking over the continent, under the guise of helping solving Africa’s food and nutritional problems. Contractual farming where farmers sign contracts producing food they don’t consume. Farmers, the main source of food end up becoming hungry. Corporate capture of food system is seen in seen in situations where corporations influence legislations and push for industrial agriculture. This production is anchored on intensified chemical use and Africa is the newest frontier for agrochemicals banned in other countries. Technology is being used in food production, drones taking over spraying of pesticides as land becomes more consolidated. The use of technology has had negative impaction food production for example depleting soil nutrients, interfering with biodiversity, especially with the push for monoculture production.

Adverts have implications on what we eat and what we grow, they tend to entice the brain and influence consumer choices. Media programmed are often used to lure farmers to buy agrochemicals. A look at seeds and agrochemicals advertisements are often in luminous colours, very healthy looking promising farmers of bumper harvests into eh shortest time possible. Processed food in the form of chickens and fizzy drinks often bring about a hook to would be consumers to entice them to buy. At the household level, whenever mothers cook indigenous vegetables locally known as mitoo (slender leave), nderema (vine spinach), mrenda (jute mallow), osuga (black nightshade). Young people complain that these vegetables are bitter and will often leave them on the table untouched, with derogatorily referring to the vegetables as herbs. Discussions with young people across Africa reveal that what they eat is affected by their purchasing power. When there is more money in the pocket , they tend to eat chicken, burgers , chips and sodas whereas when they get broke they go back to cooking healthy food .This in essence should not be the case .Healthy food should be eaten at all times .To value the wafting scent of jollof  coming from Ghana , to the  Senegalese thieboudienne, to appreciate the mukimo[4] and wimbi( millet) , the  stomach filling sensation of fufu eaten in the west Africa and not to mention the intricate process of preparing pilau and biriani eaten among the coastal region dwelling communities of Kenya. 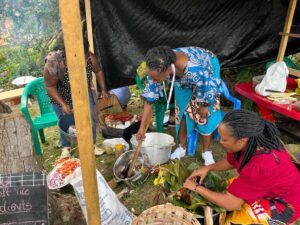 It is important to create platforms for intergenerational knowledge transfer on culinary skills , on how to use indigenous ingredients – such as msherekha or munyu which is a special food seasoning found among the Luhya community in Kenya .There is need to relevant the benefits of using cow ghee in our food , the nutritional benefits of vegetables such as managu[5] include fibre which helps in improving digestion , preventing the consumer form constipation , helps decrease risks of heart diseases such as strokes and heart attacks as well as obesity and type 2 diabetes. The richness of manage in potassium helps in regulating the body, improving blood circulation and red blood cells formation. The health benefits of eating fufu (yams) include rich in vitamins, minerals and fibre, enhance brain functions, ease symptoms of menopause, reduce inflammation and improve blood sugar control.[6] Njama njama (huckleberry leaves) consumed by  people from Cameroon ,has tremendous health benefits which include; being a rich source of antioxidants, high in iron, and a good source of vitamin C and potassium. 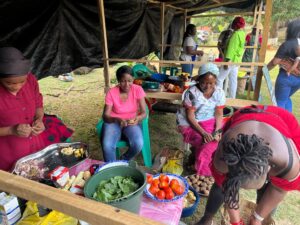 With all these health benefits found in indigenous vegetables, why the push for ultra-processed food? why the demonisation of African food? By demonising African indigenous food, a dominant narrative is created leading to African food being made inferior. This helps create in the minds of consumers a perception that to eat African food is to be rural or less modernised. It helps reinforce that processed food is the best food and cooks quicker. It is time to decolonize our mind on what we eat, it is time to reignite our pride as Africans in the food that we EAT. It is time to make the world know that Our Food is African. 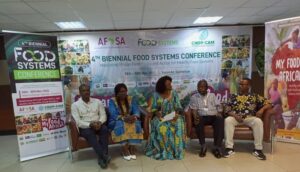