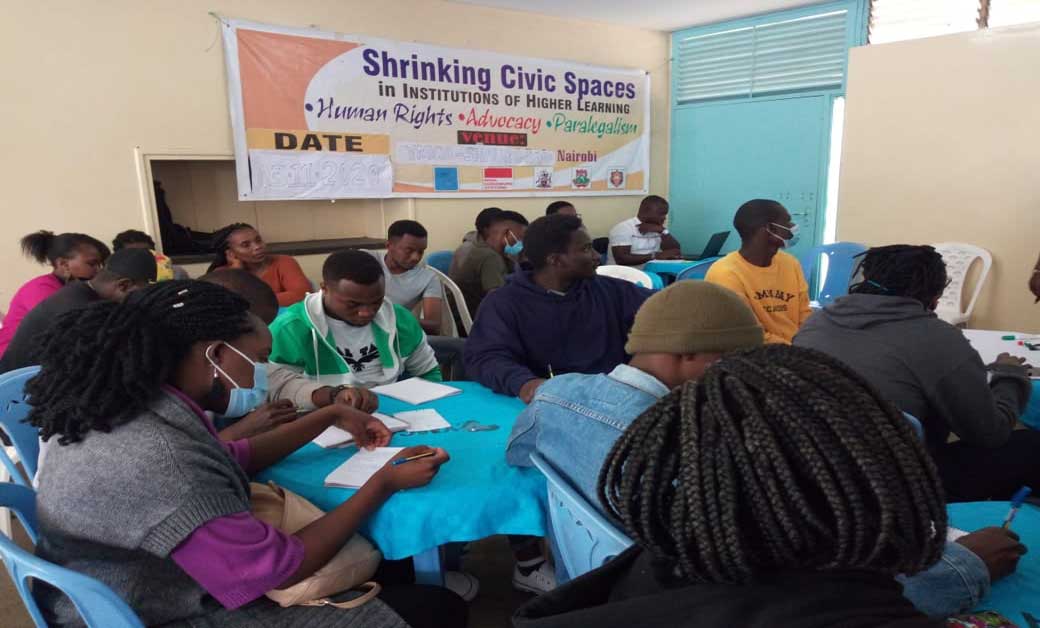 Civic space continues to shrink on daily basis. The more the world is advancing in terms of technology and globalisation, the more states and institutions are devising new methods of restricting civic spaces.

Within institutions of higher learning, civic spaces shrinks through a variety of ways. In some instances vocal students become targets of intimidation for speaking out against issues happening in their institutions, others become frustrated and may end up not graduating. Additionally sometimes the leadership chosen may not have the interest of students at heart.

Various mechanisms are used to shrink civic spaces, sometimes it is the use of police especially when students go on strike, and police are called to stop the riots. In some cases there is excessive use of force leading to students being hurt, hospitalised .In the aftermath of a strike, some students find themselves having to engage the disciplinary committee and the not so lucky ones find themselves suspended, additionally, in extreme cases some students get killed in the process of protests.

The atmosphere that has existed among university students and the police, more so public universities in Kenya has been one of mistrust. Whenever students see the police, especially on the Kenyan streets, some become agitated more so when students are disgruntled . There have been reported cases of police using excessive force to quell riots in universities. Examples of this include violence against students at Jomo Kenyatta University of Agriculture and Technology in Juja, other examples include the 2016 Student Organization of University of Nairobi (SONU) elections where it was reported that students were brutally attacked and their property damaged by police officers as well as the gunning down of Meru University student leader Evans Njoroge who was protesting against increment of school fees

Through the project students from Kenyatta University , Catholic University of Eastern Africa, University of Nairobi,Multi Media University, Masinde Muliro University and Zetec University have been trained on human rights. In addition to the above-mentioned universities, students from Daystar and community members from the social justice centres such as Mathare Social Justice Centre, Dandora Social Justice Centre and Kiambiu Social Justice and Information Network (KIJIN) have been trained on basic law. Being trained on basic law helps demystify the law, enable understanding of rights in the context of an accused person and an arrested person. These trainings also help students and community members understand how the justice system works. Additionally the existence of reservoirs of legal information is another plus. Platforms such as Namati’s Legal Empowerment Network provide a depository of information on legal issues that is easily accessible and can be used by the students and other human rights defenders in their day-to-day roles as social justice activists.

Another platform being utilised to bring justice closer to students is organising police-student dialogues where students interact with the police, share their experiences on encounters with the police (both the good and the bad) and police officers get to explain the justice process. Top on these dialogues is often the question of use of force. During these dialogues, students get to ask police officers questions and raise concerns about rights and justice.

These dialogues have been well received by both students and police officers as avenues for mending relations and at the same time creating an enabling environment for meaningful relations.

As recipients of human rights education ,paralegal training and participating in student-police dialogues, the students have had this to say about their experiences:

“ I was able to learn a lot about the law and how it works, I better understood Criminal Law especially the rights of an arrested person “ –Sefu Sani, student, Multi Media University and member of the World March of Women

Silence in the face of injustice amounts to the betrayal of the victims of injustices and their struggle to annihilate the oppressor. Silence robs us of our sovereignty, dignity and humanity –Mercy Mbatia, law student, University of Nairobi

“ I never knew I could sit with a police officer and discuss issues- Daniel Wanyama, student , Kenyatta University

“ In regards to paralegal training, the roles played by a paralegal are important and I encourage more forums, in that this helps break down law within the community, justice sectors including prisons, police stations and courts .It is important as they help step in during violations of rights or in attempted violation of rights-Brian Odhiambo, student, Kenya School of Law

Addressing shrinking civic spaces in institutions of higher learning is a model that can and should be adopted in many universities across Africa and the world at large, in so doing, given the presence of large populations in universities, the law ceases to be a preserve of the few but becomes democratised.