Review, not suspend the current constitution 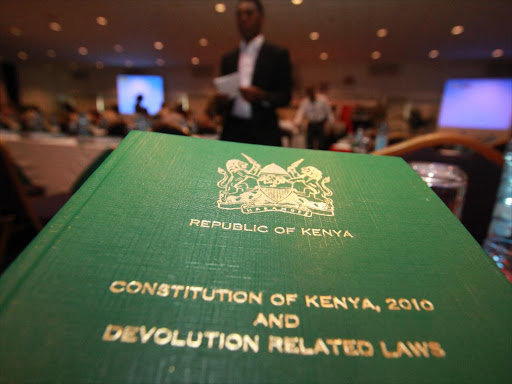 Kibet Brian, a University of Nairobi Student at Law School gives his view on the current nationwide dialogue going on about amending the Constitution

In his comment in The Weekly Citizen of October 12th to 18th 2020 titled ‘Suspend the Current Constitution’, Martin Wainaina Kenyanjui Snr argued that it was time for the Constitution of Kenya, 2010 to be ‘suspended’ for three months for Kenyans to come up with a new constitution. Interesting and progressive views were made on agriculture and land tenure. However, I found the piece knotty to the scope that bails and bonds need to be made unavailable for some offences, clamping of the freedom of assembly and the immediate but counter constitutional suspension of the constitution.

I there problematize it in two pronged approach. Firstly to the extent that bails and bonds in criminal proceedings particularly in corruption, homicide and defilement offences need to be denied upfront to all suspects. Secondly to the Orwellian possibility of usurping the current constitution in a perfect reincarnation of the exploits in the fairy fable; Animal Farm.
Wainaina homologates for express constitutional provisions that make homicide related offences, sexual crimes and corruption offences not to be bail able per se. The rationale behind this is to make the suspects ‘rot’ in jail. Primo, the theory of punishment that should guide the sentencing of convicted criminals should be to reform the convict and deter the repetition of the offence in the society. Retributive punishments where convicts ‘rot’ in jail are, at best inhuman. Kaput.

Forthrightly, the concept behind bails and bond, as I understand it, is that they seek to ensure that the suspects attend court. It is no laundromat that makes one white as snow. As such, they allow persons to continue with their lives pending the determination of their culpability to an offence. What if the charges run out to be frivolous and one is acquitted? The suspect will have suffered irreparable loss if they spent years in remand.
Bails and bonds seek to avert this. It is noteworthy that the constitution of Kenya, 2010 is a ‘post war’ constitution; written after the atrocities that marked the clamor for multiparty democracy. As a result it seeks to protect person from illegal detentions and even makes provisions for anticipatory bail. The aftereffect is that it is now hard for the powers that be to whimsically arrest and detain dissidents. However this only makes sense when the obtained orders are obeyed.

Anecdotally, Wainaina also advances the thought that the limitation of political rights need to be effected. Through a straitjacket political campaigns ‘timetable’, political campaigns will be allowed within only certain times and then banned at certain periods. This will supposedly allow state officers to deliver on their campaign promises. In doing so, he chooses to ignore that such provisions may easily be abused. In such a setting, a side will openly be allowed to campaign whereas another side will only watch in chagrin. The outcome will be a more divided nation.

Forgive my poor eyes, but the constitution seems to have no provisions anywhere in its contents on how it can be suspended. The closest it comes to this end is in Articles 256 and 257 that guide on how amendments can be made. The suspension of the ‘grund norm’ for three months is only doable in a banana republic where the rule of law is in tatters or when the elite has decided that a constitution is no longer tenable and it is time for an autocratic decree rule regime.
The Kenyan path to Camelot has been a dolorous one. The path is replete with epitaphs of persons who put their lives on the line for the recognition of the dignity of the Kenyan person. One of the corollaries of their selflessness is the transformative 2010 Constitution. It should serve the people who should turn allow it to bind them. Consequently, it is open for reviews but only through constitutional processes like the Building Bridges Initiative and the failed Punguza Mzigo and Okoa Kenya initiatives.

Oscar wilde warned us that humanity will at some point know the price of everything and the value of nothing. The price of living in a democratic Kenyan state is eternal vigilance from claw backs as Thomas Jefferson quipped. Why is this of value? Liberty, the rule of law and prosperity of all peoples are the most enviable fruits of such a state. Let us guard our constitution that has been born more from brawn than brain jealously. Calls for changes need to be pegged on constitutional basis and not iniquitous and unorthodox ways such as sanctioning for a suspension.

90 thoughts on “Review, not suspend the current constitution”