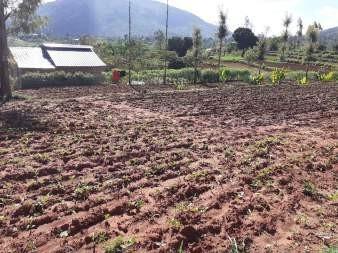 On 17th April 1996, members of Landless Workers’ Movement (MST) were shot dead by military police in Para, northern Brazil. This resulted into mass resentment around the world. La Via Campensina responded with solidarity actions and demands for justice, mobilising peasant communities in Brazil, Latin America and the world over. La Via Campensina declared April 17 as an International Day of Peasant struggles as a way of keeping the peasant resistance alive in memory.

For the International Day of Peasant Struggles 2020, the clarion call was Stay home but not remain Silent. The theme called for creative ways of mobilising given the impact of Covid 19 on normal life including organising and carrying out activities across many parts of the world.

Communities the world over were called upon to transform the windows, terraces and field into demonstration squares, to denounce capitalist hegemony, to build solidarity within communities and pledge to consume food from local peasant cooperatives and communities and not from transnationals.

The Struggles
An experience sharing session ensued on impact of Covid 19 at individual level and on food production and access.

It was mentioned that with cessation of movement directive from Kenyan government, access to food for people living in urban areas is a challenge. For example, families that depended on food from rural areas cannot get food because inter-county travel has been curtailed. The costs of food have gone up because of low supply. In addition, there is shortage of some varieties of food because to transport food, one is expected to have an inter-county travel permit. Examples given were fish in Gikomba market –Nairobi.

Police brutality is impacting on food sellers for example in Awendo market in Migori, the police disrupted a market where cattle were being sold using teargas. This led to losses of the cattle, with some of the assigned cattle sellers being arrested and forced to pay money to secure their release.

There is low food production due to low harvests in many parts of Kenya and this is further worsened by the locust infestation in Kenya which destroyed a lot of vegetation and food crops. Another challenge is rainfall which has resulted into flooding of farms. Closure of some markets across the country had led to food shortages. When police come to close up markets, sellers are also beaten up in the process leading to loss and wastage of farm produce.

Covid 19 has affected farmers’ organising, activities such as meetings cannot be carried out as before. If meetings are carried out they have to be undertaken maintaining social distancing. New ways have to be adopted to organise that maintains social distance or utilise technology when conducting meetings such as zoom and webinars. This poses a challenge especially to communities that do not have access to internet or smart phones.

Domestic violence is on the rise in many households. Husbands and wives were used to spending less time together. The Covid 19 pandemic and the resultant closures of schools, workplaces and other places for recreation means that couples spend more time together bringing conflict arising from disrupted household incomes and poor conflict management systems within the household. There is also a lack of conflict resolution mechanisms within households.

The restricted movement also means that food sellers do not have markets for their food. For example, people working in construction sites (mjengo) do not have work and have since been laid off. This means that such persons do not have a stable access to food in their households due to disrupted source of income. Another example is women who sell food in construction sites also do not have an income because workers have been forced to stay home to contain the virus. Women w and men who sell in markets also have to leave early for home because if they are found outside during curfew times they will get arrested.

There has been reported cases of arrests especially of young people, the dusk to dawn curfew also means increased stress among communities and living in fear of being caught up outside their homes during curfew.

The cessation of movement also means that communities can no longer travel to different places and exchange their seeds as they used to during previous similar meetings. Additionally, many smallholder farming communities depend on rain fed agriculture and when there is no rainfall their crops get destroyed by prolonged drought.

Shortening of market hours was also cited as a problem because communities have to comply with the curfew hours. It was also mentioned that a peasant way of life has been generally criminalised.

Discussions on indigenous seeds and their importance

The dominant narrative that industrial seeds yield better than indigenous seeds is also a challenge, and communities have to be convinced to adopt indigenous seeds as opposed to what they buy in agrovets. Access to seeds among smallholder farmers was discussed as a challenge. It was mentioned that indigenous seeds are disappearing and the need to bring back the disappearing seeds. Seeds exchanged were Bengal grams from India, passion fruits from Mulo cluster, Osuga and Sukuma wiki(Kales). It was emphasised that seed banks and exchanging of seeds among farmers can help address the disappearing seeds. It was pointed out that Covid 19 has confirmed that indeed the most important people are medical providers and food producers. It was said that the pandemic has shown the world that we can live without having to go to school, we don’t have to travel, but we can’t live without food. It was mentioned that there is need to build household food supplies in both urban and rural areas.

The participants also discussed the use of herbs in treatment of various illnesses. Examples of various herbs and the diseases they treat was discussed at length. It was agreed that herbal treatment ought to be part of discussions on food production.

Harnessing the power of herbs

The discussion emphasised the role of what we consume in either treating of diseases or increasing vulnerability to diseases. It was pointed out that there is need to go back to consuming indigenous vegetables as they have a lot of immunity and nutritional values which are being viciously attacked under the guise of
“modernity” and “civilisation”

Identification of herbs and their medicinal properties

• Members declared to advocate for decriminalisation of peasant way of life, documentation of violations of Rights of Peasants with a view of calling for accountability and seeking corrective
legislative and judicial actions
• There is need to develop strategies at individual and community level to ensure availability of food. This can be through utilisation of available spaces and growing food
• There is need to engage policy makers on issues of food sovereignty and recognition of indigenous seeds
• It is important to encourage indigenous seeds and revival of disappearing seeds

The power of herbal medicine and
traditional knowledge should be revived
• A lot of emphasis should be put on consuming what we produce, this helps ensure availability of food